CCBPI is a powerful results-oriented strategy to re-establish order and control within communities. 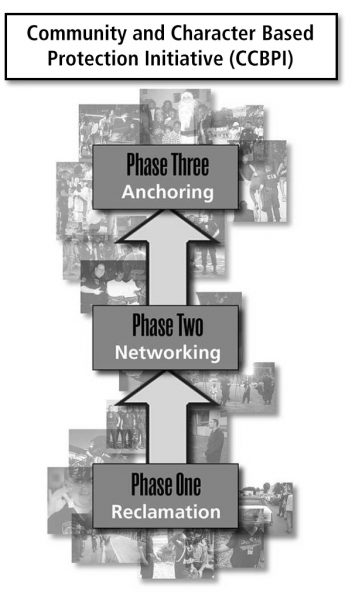 CCBPI is a term that was created by Critical Intervention Services in order to describe the systematic process of gaining control of a community and returning it back to its residents (or employees in a workplace application).

The Community and Character Based Protection Initiative (CCBPI) is CIS’ approach to community based integration. Every CCBPI program begins with a community profile and threat assessment that specifically looks at the problems and issues of the community or business (referred to as the “intervention area”). Based on this, a plan is established by adapting a three-phased approach to re-establishing order and control. The flexibility of the CIS approach is a vital part of this. It enables our practitioners to carefully tailor the program, matching specific issues with the proper tactics and the right type of officers to implement the plan. This is the key to maximizing impact and directly affecting the intervention area in the manner the practitioners intend.

CIS’ Community and Character Based Protection Initiative (CCBPI) has been recognized throughout the industry and around the world for its power in addressing problems in crime ridden communities.

Phase one of this three-phased system is termed the “Reclamation” phase. This phase usually targets the specific types of criminal activity and quality of life issues that allow the felony cycle to perpetuate. It is based on the premise that before any prevention effort can be successful, in many circumstances, a coordinated intervention must take place. This phase is directed specifically at disrupting highly visible criminal activity by using Symmetry Targeted Oriented Patrolling combined with many other specialized techniques. Symmetry Targeted Oriented Patrolling is a systematic approach to dealing with the issues that contribute to an environment that allows crime to occur. STOP operations target nuisance and quality of life issues in addition to visible criminal activity. Officers assigned to Symmetry Targeted Oriented Patrolling are referred to as STOP Team Officers. These officers receive specialized training in the dynamics of violence, community relations, the criminal activity matrix, psychological operations, implementation of shock techniques, and a host of other issues in order to enhance their effectiveness at targeting the community’s unique problems.

The deployment of STOP Team officers during the Reclamation phase usually starts with a strong focus the specific types of criminal activity that require immediate remedy. This is necessary to gain effective control over nuisance problems and subsequent community participation. Criminal activity is addressed by order of priority, as determined by the threat assessment. Criminal activity that involves organized gangs, for example, would take precedent over unorganized drug sales that occur in the open. Next, open drug sales would be prioritized over prostitution, and so on. Once these types of highly visible activities are removed, the focus and attention of officers can shift to the real underlying elements that enable a community to decline and deteriorate into a high crime area. Some of the nuisance problems addressed by Symmetry Targeted Oriented Patrolling are activities such as open alcohol consumption, loud music, loitering, abandoned cars, juvenile mischief and trespassing, etc.

Once all non-resident criminals have been cleared out from the property, Phase Two begins. Phase two of CCBPI, which is called the Networking phase, shifts focus to the eviction of problem residents and networking the children within the intervention area (preventative interaction). During the initial development of our philosophies and concepts, we quickly realized that the weakest link in a community, the children, is also the strongest link to the community. Children represent the “path of least resistance” with the fewest misconceptions about uniforms, race, or trust, and have the least amount of ill feelings towards the “police.” Simply put, the children are the most accessible point in the environment and, therefore, the starting point for developing relationships with the community. Phase Two is implemented with the focus on cultivating relationships with the children of the targeted area.

As part of this preventative interaction strategy, CIS officers implement a playful personality, using stickers, treats, curiosity “show and tell” sessions with equipment, and playing basketball or throwing a football. This is done by on-duty, uniformed CIS officers. Officers distribute fun items such as junior officer stickers and removable tattoos with the CIS agency patch as a design. Officers spend time giving advice, helping with homework, or just generally “shooting the breeze.” These officers are on patrol in the child’s own housing environment where the child feels the safest and most comfortable, not in a school or boys and girls club. This approach allows the child to feel comfortable and safe to develop relationships with the “police” because the “police” live in the same community and interact with them every day as part of their home environment. Over time this essentially solidifies a bond with the child to the point where a real trust is earned.

The Networking phase helps bring about the third phase, “Anchoring.” This phase is a natural progression of relationship development from the Network Phase. Through the children, officers’ get to know brothers, sisters, friends, mothers, fathers, and other family members. In Phase Three, CIS officers are directed to network the residents (specifically the parents), through the children. What occurs in the relationship dynamics between the officer and the community, when officers network children, is a natural process. Parents begin to pay attention and interact with officers. Many who were shy or avoidant start looking at officers through the eyes of their child who has been positively interacting with the officers. Children talk about officers around the dinner table. They talk about them when they show their parents their creative style in their coloring books. They talk about officers spending time with them and how nice they are. Anchoring, in Phase Three, is aimed at solidifying the officer’s relationship with the families of the community. As bonds develop between CIS officers and families, one can see drastic changes emerge in the community’s attitude towards “law enforcement” personnel.

Once relationships with the children and their parents solidify, real communication begins to occur. Officers build relationships to the point where children and parents start reporting criminal activity that they observe. Residents start giving officers information and build a trust that directly impacts criminal activity on properties. During this family anchoring stage, CIS officers also get to know the outside family and extended family members. This aids in determining who actually belongs in the intervention area and who does not. Naturally, this approach requires that CIS officers are assigned exclusively to specific areas–not rotated from one intervention area to another. Relationship building takes time, but without doubt, it creates drastic changes.

As the relationship between the officers and community solidifies, attention is directed at improving the level of trust and rapport between community members. Through various formal and informal methods, officers strive to introduce residents to each other and increase the community’s sense of unity.

This system has proven so effective that mothers have even turned in their sons for crimes. This is a strong testimony to their trust in the officers’ honesty and integrity. With effective policies, proper personnel selection, realistic training, and a true commitment to proactive prevention, officers are able to create real and lasting change in even the “worst” communities.

Success of the CCBPI Approach

Since the methodology was first developed in 1993, Critical Intervention Services has implemented the CCBPI approach in hundreds of communities. The success of CCBPI programs is demonstrated by the numerous CIS-protected communities that have reported dramatic decreases in criminal activity and significant improvements in resident morale.

The training you are providing to the security personnel at Critical Intervention Services (CIS), military personnel and law enforcement professionals is unmatched by civilian readiness training for the war on terror.
– U.S. Special Operations Command

...The quality of the SPOs' work in the Guardian Program at Shorecrest has made our school the envy of any administrator that has come to observe the program...I give my highest recommendation to the Guardian SafeSchool Program.
– Shorecrest Preparatory School

CIS officers not only come in and assist us, but they're committed to the community. I never encounted that before.
– Hillsborough County Sheriff's Office