A powerful strategy to remove the existing conditions that perpetuate the cycle of crime.

Most criminologists today agree that the key to making long-term reductions in crime is rehabilitation and stabilization of the afflicted community.

Since the advent of this realization by the Chicago School of Human Ecology, numerous programs and models for crime prevention through community building have been developed. However, to date, the majority of these community-based programs have proven unsuccessful in achieving any substantial or lasting results. The poor success of these initiatives can often be traced to a single issue–failure to remove the existing conditions that perpetuate the cycle of crime.

As part of the Community and Character Based Protection Initiative (CCBPI), Critical Intervention Services pioneered an approach to neutralizing problem conditions called Symmetry Targeted Oriented Patrolling (STOP). The objective of STOP operations is to bring symmetry (organization) back to the community by systematically targeting visible criminal activity, nuisance problems, and quality of life issues. STOP operations reclaim the community from predatory elements and lay the foundation for long-term growth.

The success of STOP operations can be attributed to the parallel strategies of Proactive Intervention and Preventative Interaction.

Proactive Intervention is the process of neutralizing the influence of established criminal elements on the resident population. It involves use of tactics that identify the sources of deterioration in communities and pinpoint those elements that prohibit development of relationships and weaken the fiber of the community. Ultimately, these carefully orchestrated tactics pressure targeted negative influences into abandoning their activities or leaving the environment.

One example of the tactics used in STOP operations is interdiction. People entering the community are stopped and interviewed to determine their legitimacy. Anyone who does not belong on the property is issued a trespass warning. If the individual later returns to the property, he or she is prosecuted for trespass after warning. In addition to interdiction, STOP team officers use a variety of tactics to interfere with criminal enterprise. For example, individuals suspected of drug dealing may be kept under continuous overt surveillance. The conspicuous presence of STOP officers in this situation prevents the dealers from conducting business and frightens away potential buyers. “Conspicuous presence” tactics are an example of the many types of methods that STOP officers use to intimidate, confuse, and promote insecurity in criminals.

STOP teams also work closely with law enforcement agencies to remove criminals from the community. Officers frequently exchange information and intelligence with police regarding criminal activities and aid in identifying perpetrators and gathering evidence to support prosecution. In this capacity, the efforts of CIS STOP teams has lead to hundreds of arrests.

While criminal elements are being rooted out, STOP officers lay the foundation for future community growth through preventative interaction. This initial process involves implementing techniques and strategies that engender social capital—the personal investment by community members in the betterment of their own community. Through establishing and enhancing relationships, preventative interaction tactics expand the community fiber that make up community networks, and ultimately, enhance social capital.

The communicative efforts of STOP officers work to gain the trust of community members. Moreover, in addition to generating social capital, the objectives of preventative interaction are to improve the community’s perspective of public safety, re-establish a sense of personal security, and raise the community’s level of self-esteem. The community takes a positive interest in its own well-being, reclaims ownership of the community and continues to cultivate its social capital.

In many communities, STOP officers are initially viewed by residents with curiosity and, in some cases, suspicion. After years of negative contact with police, many people in dysfunctional communities are apprehensive about interacting with “authority figures.” To break the ice, STOP officers focus their attention on the best communication opportunity in the community–the children. STOP officers talk with the children, play basketball, give out coloring books, and take every opportunity to establish rapport. Once parents begin to see the positive relationship between STOP officers and the children, trust is established and communication expands into the adult community.

After the officers have gained the confidence of residents, the next step is establishing a mutual sense of trust between community members. To accomplish this, STOP officers use a variety of methods. Officers organize social and civic events, introduce new residents to the neighborhood, and spend time just simply “shooting-the-breeze” with people. During this time, officers also work with property managers and community leaders to identify and correct environmental conditions that contribute to a state of disorder. The result of these efforts is a renewed sense of unity in the community and reinforced trust and communication between residents and the “authorities.” 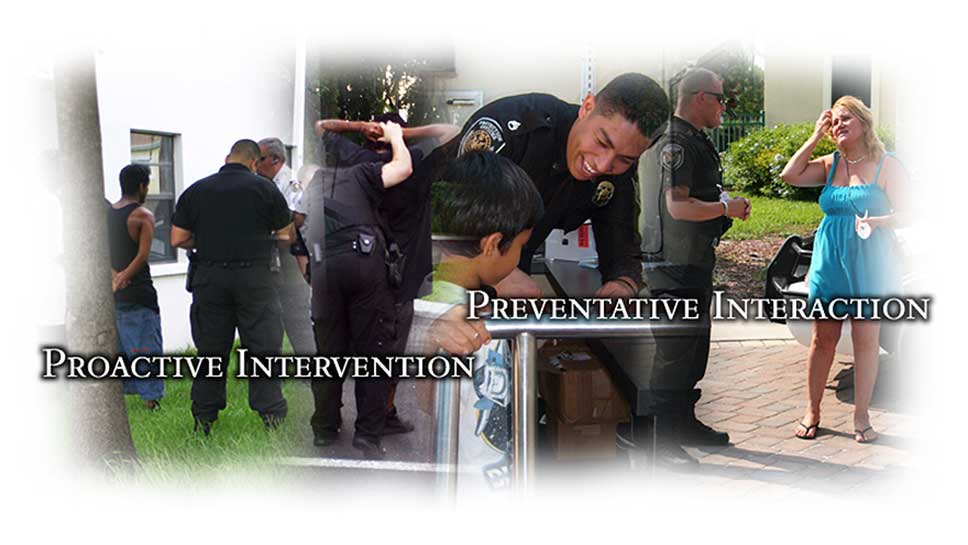 The relationship between Proactive Intervention and Preventative Interaction is a dynamic one that results in holistic solutions to community issues and needs. While proactive intervention strategies are short-term results-oriented techniques and preventative interaction strategies involve long-term approaches, the two strategies work in partnership to reclaim and improve or rebuild communities. These strategies are highly effective as they interact to simultaneously build upon positive influences within communities while attacking negative ones, thus solidifying the community fiber and expanding the community networks that are essential to a healthy community.

The principles of Symmetry Targeted Oriented Patrolling are applicable to any environment–regardless of the level of crime. STOP operations are generally tailored to the community’s needs by adjusting the intensity of proactive intervention. In crime-ridden environments, an aggressive, high profile intervention is often initially required to establish safe charge of the community. In addition to neutralizing the power of criminal elements, the high profile intervention sends a strong statement to the community that change is occurring and cultivates their curiosity. This opens the door for subsequent preventative interaction efforts. In the CCBPI methodology, this initial intervention is referred to as Phase One: Reclamation.

High intensity interventions usually begin with a rapid deployment and lockdown of the community. Within minutes of arrival on the first night, STOP officers secure every entrance into the community and begin sweeping the area for criminal and nuisance activity. Everyone entering the area is identified to determine his/her legitimacy. In some cases, multiple layers of access control are used within the community to ensure that no one slips through the net. Anyone entering the property without a verifiable reason is issued a trespass warning. Any violation of the trespass warning is grounds for prosecution. To support this initial crackdown, coordination is often arranged with police to provide continuous on-site assistance.

The highly visible approach used during the initial intervention is very deliberate. The objective is to send a bold message to criminals and the community alike: Change has occurred and the criminals are no longer in control. Every act the STOP officers undertake communicates this statement—including even the deliberate defacement (a.k.a. “dissing”) of gang graffiti.

The initial high intensity intervention usually lasts for several days. Once all “outside” elements have been removed from the property, the officers scale back the intensity of the lockdown and begin supplementing operations with preventative interaction. During this time, the focus of intervention activities shifts from “outsider” criminals to criminal residents who are evicted or forced to abandon their activities under heavy pressure.

Once the community is in a secured state, the intensity of intervention activities is gradually decreased and a long-term STOP program is implemented to lay the foundation for CCBPI Phases Two and Three (“Networking” and “Anchoring”).

The training you are providing to the security personnel at Critical Intervention Services (CIS), military personnel and law enforcement professionals is unmatched by civilian readiness training for the war on terror.
– U.S. Special Operations Command

...The quality of the SPOs' work in the Guardian Program at Shorecrest has made our school the envy of any administrator that has come to observe the program...I give my highest recommendation to the Guardian SafeSchool Program.
– Shorecrest Preparatory School

CIS officers not only come in and assist us, but they're committed to the community. I never encounted that before.
– Hillsborough County Sheriff's Office